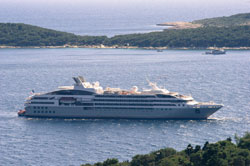 You'll embark in Osaka, Japan's second city, which is home to a fortress dating back to the 16th century, before setting sail towards the island of Hachijo-jima, which lies off the coast of Tokyo and is composed of two magnificent volcanos.

Located a few thousand kilometres off the coast of the main Japanese archipelago, and accessible only by the sea, these subtropical islands nicknamed the "Galapagos of the East" preserve incredibly rich fauna and flora: more than 40% of the 500 plant species are endemic.

Many marine mammals live in the deep waters of the underwater canyon on which the archipelago is located.

At the end of the world, at the crossroads of Japanese and Micronesian influences, the archipelago has developed an original culture.

Finally, you'll reach the idyllic island of Guam in Micronesia, your disembarkation port.

Encounters with wildlife represent possible experiences but cannot be guaranteed.

1. The rates of our cruises are per person and include the following: All meals while on board the ship (from dinner on the day of embarkation to breakfast on the day of disembarkation) Captain’s welcome cocktail and gala dinner Mineral water, tea, filter coffee, a selection of white, red and rosé wines offered during meals; afternoon tea Evening entertainment and events Luggage transfer from pier to the ship and vice versa Room service 24h (special selection) English speaking lecturer on selected sailings. Water sports activities (except scuba diving) using the ship’s equipment, when permitted by local authorities and confirmed by ship Master according to safety and sea conditions onsite Open Bar (pouring wines, house champagne, alcohol except premium brands…list available upon request).

Any ground services before and/or after the cruise other than the ones mentioned in each “Cruise & Flights” package and for which details are available upon request.

Optional Spa package to be booked prior your departure; please ask for more information Optional shore excursions.
Beverages other than the ones mentioned.
Laundry services, hair salon and à la carte Spa treatments Personal expenses, on board medical consultations and drug prescriptions.
Gratuities (included only in cruise package sold in US/Canada).


Cancellation/luggage/assistance/repatriation/medical insurance(s) Visa fees, if applicable It is essential not to forget to bring with you your binoculars for a good fauna observation. Please do not forget to bring your medical certificates when it is required to participate in an expedition cruise.

Click on the buttons below to request a quote on this deal or contact us directly with further questions or comments.

Request A Quote Send To A Friend Have A Question? Contact Us